Native Lands Attributions Where We Have Races 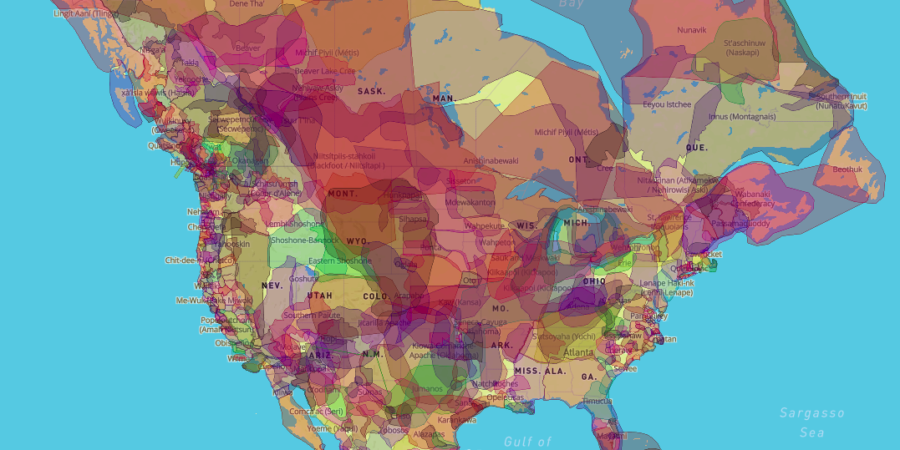 You may have noticed lately that some of your friends, people you follow, and many kinds of organizations are listing the names of the Native America tribes who used to live on the land where they are recreating; this is referred to as Native Lands attribution. It is a way to acknowledge and honor those who were here before we were, and who had their homelands taken from them by the US government. You’ll notice that each of our race webpages lists those tribes who lived on the lands where the race occurs. In researching this, we’ve discovered a few fantastic resources that we wanted to share so that you too can learn more about the Native Americans who were here first and the treaties that displaced them.

The first and a great starting place is Native Lands Digital. This Canadian non-profit has an excellent interactive map where you can see the tribes/territories, languages, and related treaties over much of the world. We learned about this resource while participating in the Justice, Equity, Diversity and Inclusion: Action Steps Towards Change for Organizations session of the Oregon Outdoor Recreation Summit. On the map, when you hover or click, you’ll notice the Cession numbers and tribes for that area (cession is defined as formal giving up of rights, property, or territory). Clicking on the Cession number takes you to the Tribal Connections website, by the US Forest Service. Clicking on that map pops up a window with the Cession number, date, and links to the actual treaty text and the Royce Schedule. What’s that? It is the annual report of the Bureau of American Ethnology to the Secretary of the Smithsonian Institution (compiled by Charles Royce). Clicking that link takes you to the page in that actual book where you can read the description that area of land that was taken, and what was provided in return.

The section about Cession #370, of the Confederated Tribes of the Middle Oregon (Warm Springs), reads:

June 25, 1856.
Cede tract with the following boundaries: Commencing in the middle of the Columbia river at the Cascade falls, running thence southerly to the summit of the Cascade mountains; thence along said summit to 44 degrees N, latitude; thence E. on that parallel of the summit of the Blue mountains, or the western boundary of the Sho-sho-ne or Snake country; thence northerly along that summit to the point due E. from the head waters of Willow creek; thence W. to the head waters of said creek; thence down said stream to its junction with the Columbia river; thence down the channel of the Columbia river to the place of beginning.

Reserve the following tract: Commencing in the middle of the channel of the De Chutes river opposite the eastern termination of a range of high lands known as Mutton mountains; thence westerly to the summit of said range, along the divide to its connection with the Cascade mountain; thence to the summit of said mountains; thence southerly to Mount Jefferson; thence down the main branch of De Chutes river heading in this peak, to its junction with De Chutes river; thence down the middle channel of said river to the place of beginning.

The treaty for the tribes of Middle Oregon is too lengthy to post the whole thing here, but you can and should read the entire treaty. Reading this may give you a different perspective than what we learned in elementary or middle school.

In consideration of, and payment for, the country hereby ceded, the United States agree to pay the bands and tribes of Indians claiming territory and residing in said country, the several sums of money following, to wit:

Eight thousand dollars per annum for the first five years, commencing on the first day of September, 1856, or as soon thereafter as practicable.

Six thousand dollars per annum for the term of five years next succeeding the first five.

Four thousand dollars per annum for the term of five years next succeeding the second five; and

Two thousand dollars per annum for the term of five years next succeeding the third five.

All of which, several sums of money shall be expended for the use and benefit of the confederated bands, under the direction of the President of the United States, who may from time to time, at his discretion determine what proportion thereof shall be expended for such objects as in his judgment will promote their well-being and advance them in civilization; for their moral improvement and education; for building, opening and fencing farms, breaking land, providing teams, stock, agricultural implements, seeds, &c; for clothing, provisions, and tools; for medical purposes, providing mechanics and farmers, and for arms and ammunition.

Take a look at these maps. Click through to read about the area where you grew up, or where you live now. What can you learn about the lands you cherish, where you run, and where you call home? We are definitely not experts on this topic. But, we are continuing to learn about our history and looking at ways to make the future better and more inclusive for all.

Resources:
We are sharing these resources so that you too can make native lands attributions.